Global warming is changing the Arctic by causing permafrost thaw, glacier melt, droughts, fires and changes in vegetation. These developments are strongly linked to the energy exchange between land and the atmosphere strongly influenced by vegetation type which researchers has now helped uncover with data from PROMICE and GC-Net.

The Arctic’s diverse vegetation is one of the key factors in the energy exchange between the Earth’s land surface and the atmosphere which is so far disregarded in climate models. This is the conclusion of a newly published paper in Nature Communications by a team of international researchers including GEUS.

Arctic vegetation is highly diverse and ranges from dry grasslands and wetlands to scrubland dominated by dwarf shrubs as well as barrens with mosses and lichens. The researchers linked this vegetation diversity to all available energy exchange data collected in the Arctic between 1994 and 2021 including GEUS’ ice and glacier monitoring data from PROMICE, GC-Net and GEM as main sources.

“We now know which plant communities have a particularly pronounced cooling or warming effect through energy exchange. This enables us to determine how changes in plant communities, which are occurring in many regions in the Arctic, are affecting permafrost and the climate,” says UZH professor Gabriela Schaepman-Strub from the Department of Evolutionary Biology and Environmental Studies of the University of Zurich (UZH), leading the study.

Especially shrubs will drive up the amount of energy going into the terrain, researchers found, compared to lower and lighter colored type vegetation.

“Remarkably, in summer the difference in heat flux between two types of vegetation – such as a landscape dominated by lichens and mosses and one with shrubs – is about the same as between the surface of glaciers and green grasslands,” postdoc Jacqueline Oehri first author of the paper explains.

“The shrubs’ dark branches emerge from under the snow early, absorb sunlight and pass it on to the surface long before the snow melts away,” she adds.

The study’s data make it possible to incorporate the effects of different plant communities and their distribution into climate predictions. Researchers can thus use improved climate models to calculate whether, and to which extent tundra vegetation in the Arctic plays a role in cooling the land surface. And to what extent this will change with changing climate and thus changing vegetation in the far North.

Another key driver of the energy exchange in the Arctic is of course the ice- and snow-covered areas, the light surface acting as a somewhat stable cooling agent, historically. Therefore, energy exchange data from ice- and snow-covered areas served as an important baseline for the study, co-author and GEUS glaciologist Baptiste Vandecrux explains.

“This study actually shows how data from ice focused monitoring projects such as PROMICE and GC-Net can help understand the ice-free areas better as well. Everything is changing so rapidly in the Arctic and having a baseline for energy fluxes on the ice sheet can help monitor a range of different changes happening in the rest of the region,” says Vandecrux.

Almost 20 years’ worth of energy flux data gathered by GEUS amongst others between the ice sheet surface and atmosphere helped establish the norm for fluxes at ice- or snow-covered surfaces in general. Which includes most of the Arctic for most of the year.

Preserving permafrost in the tundra

“Our findings on the energy flows in the Arctic are extremely relevant, since the preservation of permafrost depends to a large extent on the heat flux into the ground,” says Schaepman-Strub.

Rapid changes of climate in the Arctic will however include equal changes in vegetation patterns thus requiring improvements in data collection, she says.

Although the Arctic is changing rapidly and has a major impact on the climate dynamics of the entire planet, there are only few reliable measuring stations in this region of which GEUS oversees the majority. In addition to calling for current stations to remain in operation, the study authors believe new stations are needed in those Arctic landscape types that could only be partially analyzed due to incomplete data.

Greenland Ecosystem Monitoring (GEM) is an integrated monitoring and long-term research programme on ecosystems and climate change effects and feedbacks in the Arctic running since 1995. GEUS is running the part of the project monitoring glacier and ecosystem dynamics called GlacioBasis.

Greenland’s many small glaciers are melting at great speed, and the melting is increasing, especially in the Arctic regions where the warming is worst. Now, researchers have studied precisely how much mass these glaciers – not connected to the ice sheet – have lost in recent decades.

In the Arctic, temperatures are rising more than in the rest of the world, and this is causing the northernmost glaciers in Greenland to melt at record speed. This is shown in a new study by researchers from the Geological Survey of Denmark and Greenland (GEUS), DTU Space, NASA Goddard Space Flight Center, Utrecht University, University of Bristol and the University of Copenhagen.

The study focuses on smaller glaciers with no connection to the Greenland Ice Sheet. These peripheral glaciers make up only about four percent of Greenland’s ice-covered areas, corresponding to approximately the same area as Ireland (72,000 km2), but they contribute as much as 11 percent of the total loss of ice from Greenland’s ice-covered areas. Thus, they are a major contributor to global sea level rise.

“The loss of ice from these small glaciers occurs because they are more sensitive to ongoing temperature changes and therefore melt faster than we see in many other places in the Arctic,” says Professor Shfaqat Abbas Khan from DTU Space, who is the lead author of the paper just published in Geophysical Research Letters.

The new study shows that the melting of the peripheral glaciers has increased dramatically over the past two decades. On average, 42.3 gigatons (billion tonnes) of ice melted per year from October 2018 to December 2021. In comparison, ‘only’ 27.2 gigatons melted annually in the period February 2003 to October 2009.

“We can see that there is a marked increase in the melting of the glaciers in northern Greenland. This shows that the ice masses in Greenland are very unstable and that they make a considerable contribution to the global sea level rise,” says Professor Shfaqat Abbas Khan.

“It is disturbing, but to be expected, that the northernmost ice sheet on the planet is hit hard by the ongoing temperature rises, because it is evident that the temperature here has also risen the most in the last 20 years.”

The changes have been recorded using altimetry (altitude measurements) with the American satellites ICESat and ICESat-2.

Although the isolated glaciers are not part of the Greenland Ice Sheet, it is important to include them in the total melt budget from the Arctic in order to calculate exactly how much the region contributes to sea level rise.

Thus, it is important to keep track of all sources, especially because there are large variations in the melting patterns in different parts of Greenland, says Senior Researcher and co-author of the new study, William Colgan from the National Geological Survey of Denmark and Greenland (GEUS) Department of Glaciology and Climate. 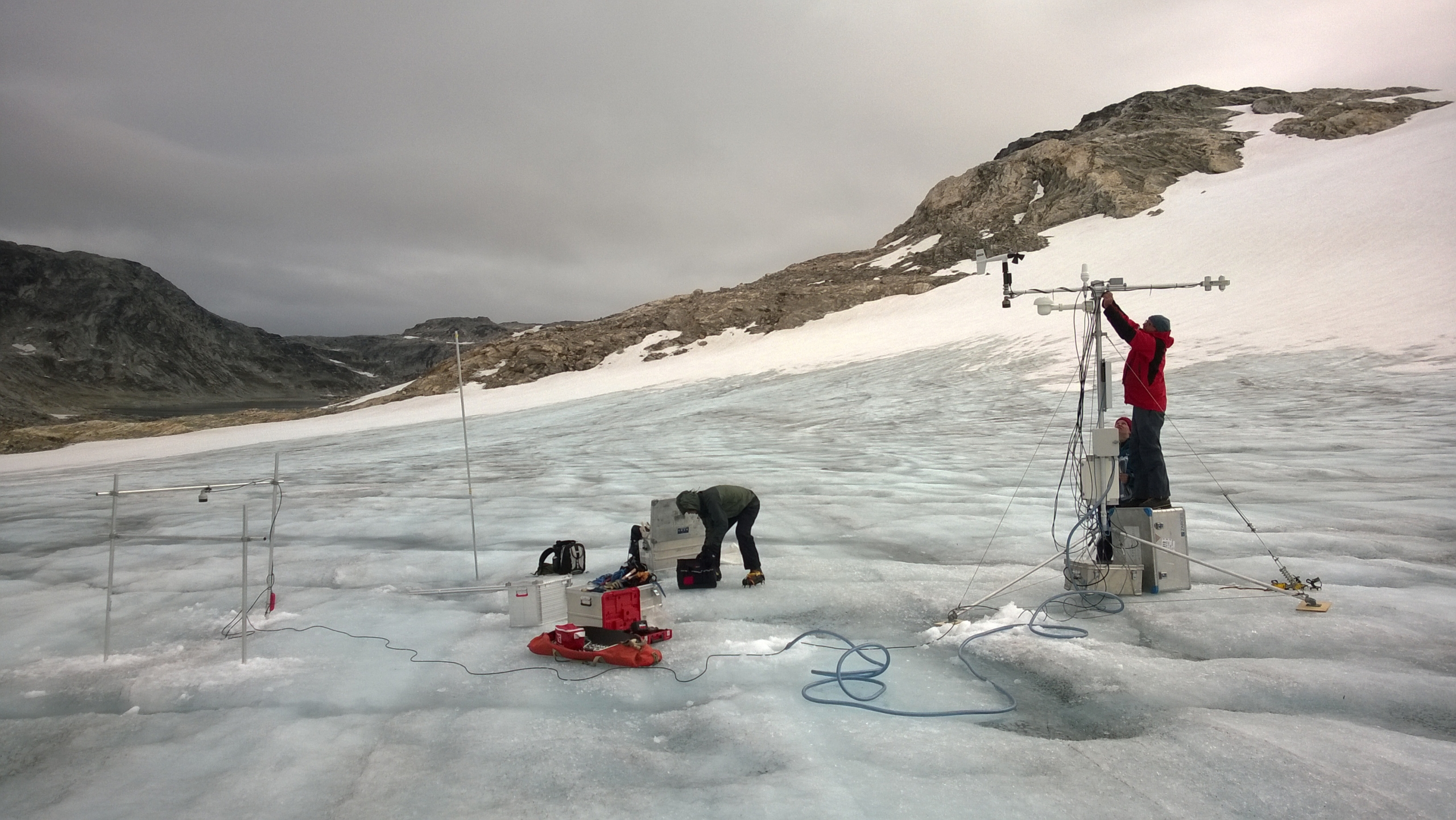 Overall, there is a large net melting of the ice in Greenland as a result of global warming, which is hitting harder here than in other regions of the world. But the picture is very complex and varied, he says:

However, this is offset by the proportionally very heavy melting from the peripheral glaciers in North Greenland in particular. Together, they now lose four times as much mass annually as in 2003, the new study shows.

The work is part of the continuos effort lead by GEUS monitoring the over all response to global climate change from the Arctic ice covers and consequential sea level rise.