New study shows the iceberg calving from the Greenlandic glaciers has increased with almost 20 percent since 1986. The data and code from the research is accessible for anyone interested.

A new study led by The Geological Survey of Denmark and Greenland (GEUS) and published with Earth Systems Science Data estimate the ice discharge -transfer of land-ice into the ocean, at 276 tidewater glaciers around the Greenland Ice Sheet between 1986 and 2017. This makes it the most dense sampling of the ice sheet’s tidewater glaciers to date. 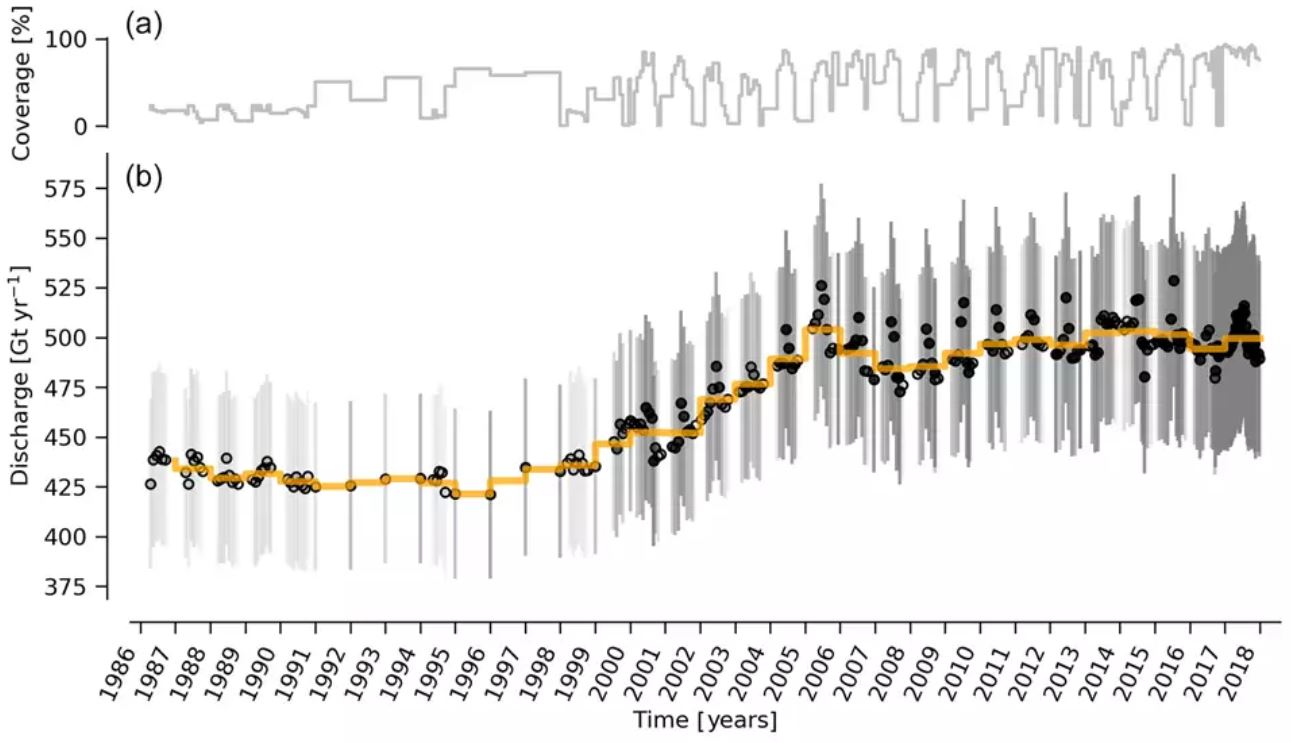 Time series of iceberg discharge from the Greenland Ice Sheet. Dots represent when observations occurred. The orange line is the annual average. Coverage denotes the percentage of glaciers from which total discharge is observed at any given time. Total discharge is ‘estimated’, rather than ‘observed’, when coverage is <100 %.

“A special thing about this study is, that not only the article and the data, but also the code behind it, is open access. This not only makes the complex results reproducible, but also ensures that other research groups around the world can efficiently build upon this work,” says Kenneth Mankoff, Senior Researcher at GEUS.

For example, the ice-sheet-wide discharge in this study is slightly different from previous studies. It is uncertain how much of this is due to differences in flux gate locations, meaning the virtual lines across the glacier through which the ice discharge is estimated. But now other researchers will be able to use precisely the same flux gates in further studies.

Besides this, the study is based on data from Programme for Monitoring of the Greenland Ice Sheet (PROMICE), which is committed to regularly updating the dataset going forward.

“The study of Greenland mass balance and its contribution to sea level rise will benefit from operational products that are continually updated and derived from reproducible methods, rather than one-off studies that often fail to clearly explain why results are different from other studies,” says Kenneth Mankoff.