The Arctic’s largest ice shelf has detached a 113 km2 area. The last few years have been incredibly warm in northeast Greenland and this appears to be a progressive disintegration. 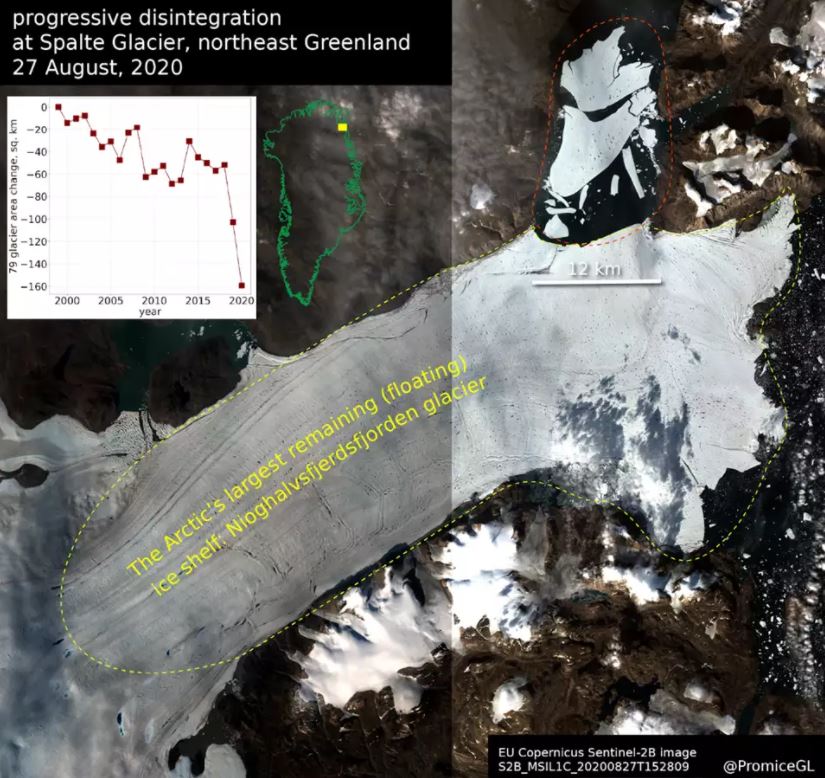 The red area in the optical satellite image shows the ice lost the past two years from the part of the Nioghalvfjerdsfjorden Glacier called Spalte Glacier that calves into Djimphna Sund. An area of 113 km2 has been lost. Source: Copernicus Sentinel data modified by GEUS.

Annual end-of-melt-season area changes for the Arctic’s largest ice shelf in Northeast Greenland are measured from optical satellite imagery, and it shows that the area losses for the past two years (year 2018/2019 and year 2019/2020) both exceeded 50 km2 . In total an area nearly twice that of Manhattan Island, New York. In the survey period since 1999, the ice shelf has lost 160 km2.

“We should be very concerned about what appears to be progressive disintegration at the Arctic’s largest remaining ice shelf, because upstream it is the only major Greenland ice sheet ice stream, draining 16 % of the inland ice reservoir,” says Professor Jason Box from The Geological Survey of Denmark and Greenland (GEUS).

The Northeast Greenland Ice Stream extends 600 km into the interior of the ice sheet draining mainly through the two outlet glaciers Nioghalvfjerdsfjorden Glacier and Zachariae Glacier, when Zachariae lost its ice shelf, 2002-2015 followed by a large increase in ice loss by calving processes. Now, for two consecutive years, the ice shelf of Nioghalvfjerdsfjorden Glacier is disintegrating at similar rates. 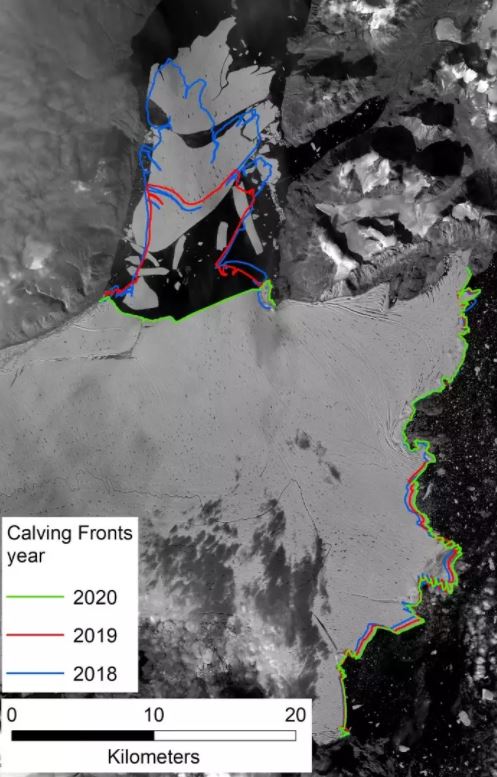 Dr. Niels J. Korsgaard, researcher at The Geological Survey of Denmark and Greenland (GEUS), explains that when an ice shelf is reduced or completely collapses, resistance of ice flow to the ocean is also reduced making the glaciers accelerate and thin.

“When you observe large parts of an ice shelf breaking off you do raise an eyebrow, but with current developments in the Arctic there is also the realization that this is to be expected,” Niels J. Korsgaard says and continues:

“Temperatures in the Arctic are rising faster than the global average. More heat is available from air and ocean to melt away the bottom and surface of ice shelves, and the thinning ice shelves are more susceptible to breaking up. We saw this with Zachariae Glacier, this summer with Milne Ice Shelf in Canada, and now Nioghalvfjerdsfjorden Glacier is losing parts of its ice shelf as well.”

Dr. Anne Solgaard, researcher at The Geological Survey of Denmark and Greenland (GEUS) explains that glacier velocities derived from a range of satellites shows a significant acceleration at the Nioghalvfjerdsfjorden Glacier over the past decade.

“Using almost 30 years of satellite data, we see speed up in the glacier flow over the past decade. It is not only near the current disintegration, but we measure acceleration 80 km upstream where the ice begins to float, indicating a large-scale change to this huge glacier,” says Anne Solgaard.

Dr Jenny Turton, researcher at FAU, Germany, who is investigating the impact of a changing climate on the glacier says:

“The last few years have been incredibly warm in northeast Greenland. We had very early melt onset in 2019 linked to the heatwave across Europe and Greenland.” 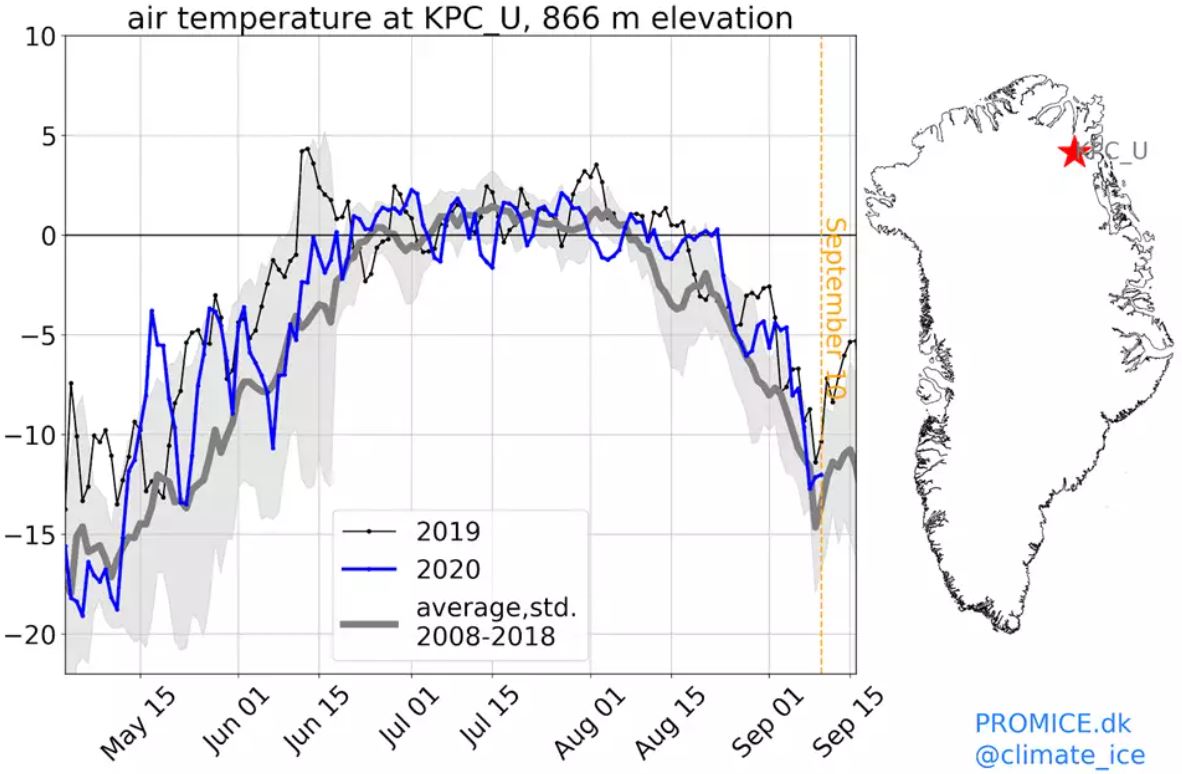 PROMICE.dk automatic weather station recordings since 2008 indicate how 2019 and 2020 air temperatures have been above the previous 10 year average. Source: Promice.dk and GEUS

“The atmosphere in this region has warmed by approximately 3°C since 1980 and record-breaking temperatures have been observed in 2019 and 2020”, says Jenny Turton.

She explains that warmer summers mean even more melting of the glacier and ice sheet.

“Each summer, water drains from the Greenland ice sheet onto the tongue of the glacier, forming rivers and ponds on the surface. Refreezing of the water in winter creates additional pressure on the floating tongue, which can lead to calving events.”

The warm weather also means that the sea ice along the east coast of Greenland is breaking up and melting. Sea ice can form a barrier to hold back the glacier ice, so in years with less sea ice, calving can occur. 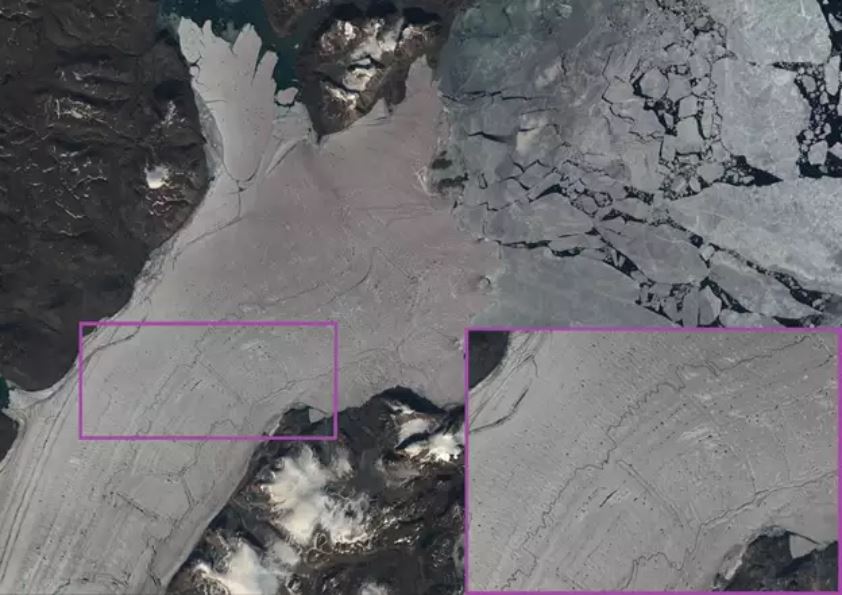 EU Copernicus Sentinel 2B satellite image from July 31st 2019 showing the pools and rivers of water (dark blue) on the surface of the Nioghalvfjerdsfjorden Glacier.