Every type of loss and influx of ice and snow on the Greenland Ice Sheet has now been gathered in one model, a so-called input/output-model, which provides scientists worldwide with the best information about what is actually happening with the large ice area in the north.

It’s clear to everyone, that the Greenland Ice Sheet is melting, but exactly how much? And by exactly which processes? The Programme for Monitoring the Greenland Ice Sheet (PROMICE) has the answer with updates now coming in near real time. The team behind PROMICE just published an updated model offering the latest update on the mass balance of the Ice Sheet including new data and observations. All of which is described in a paper recently published in Earth System Science Data.

New data includes the fact, that approximately eight per cent of the melting from the Greenland Ice Sheet actually takes place from the bottom and inside the ice (called basal melt). Information also quantified in a paper from the PROMICE research group published in Nature Communications in June 2021. This had not been quantified before, and the information has up until now not been a part of most climate models used to predict the impact of the melting regionally and globally.

”This does not change the melting estimate but is gives us a much better picture of how the ice is melting and why. Many other models only show that there is general melting and no more than that,” says Ken Mankoff, who is one of the PROMICE researchers running the surveillance programme on the Greenland Ice sheet.

”Obtaining a better understanding of exactly where and how the ice melts and the involved processes makes it easier to understand the changes we observe over time. By doing so, our modelling of the future changes will be more accurate,” he adds.

He explains that the new calculation of the basal melt is one of the updates, which has now made the PROMICE surveillance model one of the most advanced. That is to say that the PROMICE data set:

These factors make it easier for researchers not only at GEUS but all over to monitor the pulse of ‘the patient’ 24/7.

Predicts melting through next week

Apart from the basal melt data, the PROMICE model incorporates a string of other data.

The data set that the PROMICE researchers have pieced together goes all the way back to 1840 and ‘all the way to next week’ as Ken Mankoff says.

”Our model gives a pretty good estimate of snow and ice influx and loss one week into the future. This is based on all the data it contains about ice reaction patterns in the past combined with the present weather and climate prognoses etc.”

Amongst other things he has made a graph that constantly and in real time updates how much ice melts or is added. You can see it below or the automated original placed at Twitter here. 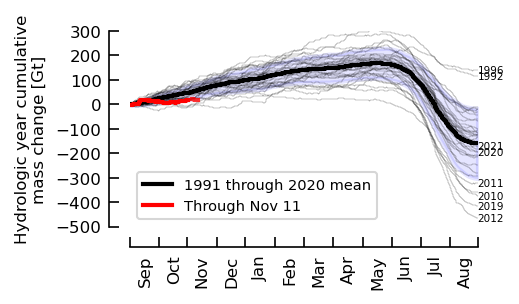 The paper ‘Greenland ice sheet mass balance from 1840 through next week‘ published by Earth Science System Data is open access.

All data from PROMICE can be accessed here.