The recently published Danish Finance Act allocates funds for The Geological Survey of Denmark and Greenland (GEUS) to continue the Greenland Climate Network (GC-Net) as part of a complete, future monitoring of the Greenland ice sheet. 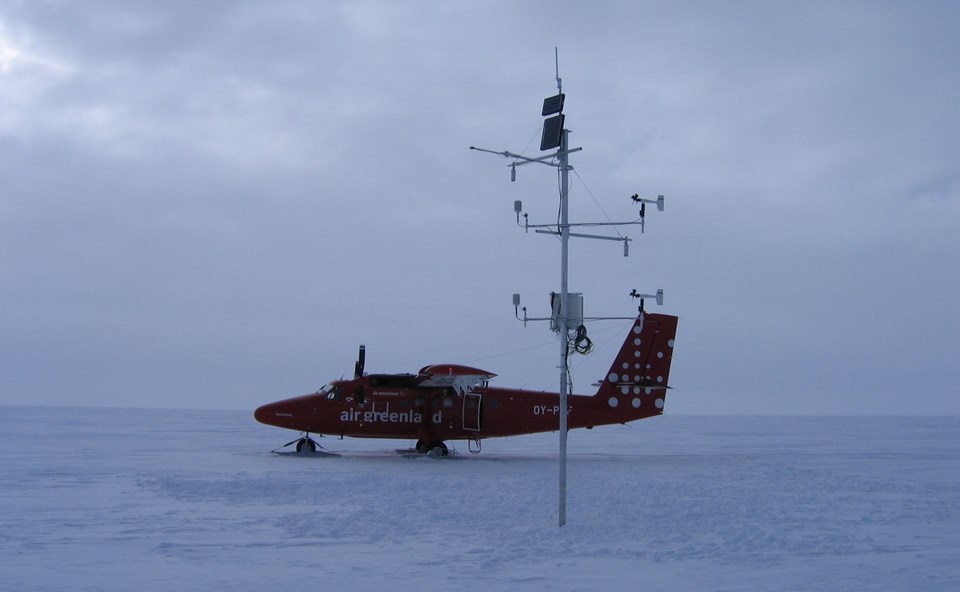 Spread across the enormous middle of the Greenland ice sheet is a network consisting of 16 climate stations called the Greenland Climate Network (GC-Net), which was established in 1995 as part of NASA’s climate research programme. Due to reprioritisations in the US, the financing of GC-Net runs out by the end of 2020. Therefore, it has been decided that The Geological Survey of Denmark and Greenland (GEUS) will take over and maintain GC-Net in the future in collaboration with ASIAQ Greenland Survey.

“It makes a lot of sense to place the monitoring of the Greenland ice sheet within the Danish Commonwealth. It is the second largest ice mass in the world and now also the biggest contributor to sea level rise globally. So we have an obligation to monitor what happens to it,” says Andreas Ahlstrøm, new programme leader for the GC-Net and Chief Consultant in the Department for Glaciology and Climate at GEUS.

It takes 30 years to identify a climate trend

GC-Net is already a central part of the climate monitoring on the Greenland ice sheet where data from the climate stations, among other things, is used to validate satellite data and improve climate models of the ice sheet. In this type of research, scientists use so-called climate normals – i.e. an average of the weather over a 30 year period, which is necessary in order to say anything for certain about the development of the climate. And according to Jason Box, new research leader for the GC-Net and research professor in the Department for Glaciology and Climate at GEUS, this is another important reason why GC-net should continue.

“By supporting a series of short term science studies, the US enabled my (recently late) mentor Konrad Steffen to sustain the GC-Net for more than two decades. Now Denmark is carrying the torch forward as we are approaching 30 years of observations – the period of time key to separating the year to year ‘noise’ from the climate trend,” says Jason Box, who has worked in GEUS since 2013, and who made most maintenance of the GC-net from its beginning and the first 11 years.

GEUS already runs the Programme for Monitoring of the Greenland Ice Sheet (PROMICE), which is also a network of climate stations. But as opposed to GC-Net, PROMICE’s climate stations are placed on the edge of the ice sheet where they monitor the amount of melt, the climate, the movement of the ice and the loss of ice from the calving glaciers in Greenland. And according to Robert Fausto, project manager for PROMICE and Senior Researcher in the Department for Glaciology and Climate at GEUS, it is extremely important that both PROMICE and GC-Net exist.

“The combination of GC-Net and PROMICE enables us to say something about the total mass balance of the ice sheet – meaning how much snow is falling on the middle of the ice sheet to balance the loss from melt and glaciers. We need both networks of climate stations to get a complete picture of how the climate affects the Greenland ice sheet,” says Robert Fausto.

GEUS takes over GC-Net at the beginning of 2021. There will then be a transition period, which will be used to determine how the collaboration with PROMICE is going to be and what the research infrastructure is going to look like in the future.

Data from both PROMICE and GC-Net will continue to be freely available to the international research community. See the data from PROMICE here.