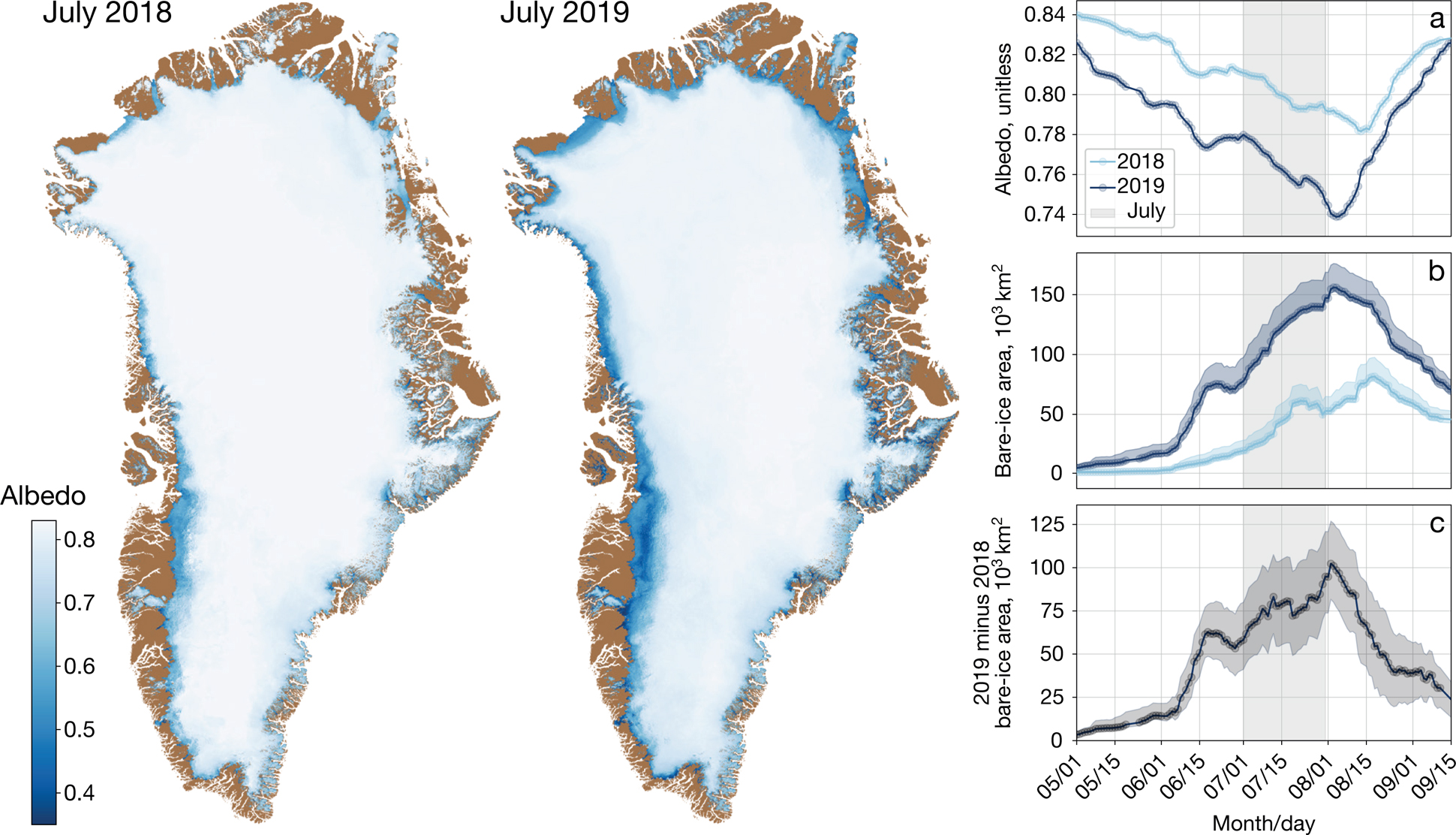 GEUS and PROMICE professor Jason Box recently made the front page in Danish national media with testimony of algal blooms and rain on the Greenland ice sheet. PROMICE field work helps quantify the ice algae blooms and their effect on melting.

Autumn 2021, Professor Jason Box and two PROMICE colleagues landed on what could appear to be tarmac during a field trip to a glacier near Narsaq in the Southwest of Greenland. However, the dark surface was in fact glacier ice hit by a heavy bloom of algae adapted to ice surfaces, called ice algae.

Recently the story was picked up by one of Denmark’s major newspapers, Politiken, who ran it as front cover just before New Year’s Eve of 2021. In the article, Jason Box explained how the algae blooms makes the ice darker causing it to absorb more sunlight and thus melt faster.

“I never saw the ice as dark as this. It was a surprise and made me concerned,” Jason Box said to Politiken, adding that where the ice algae grow particularly well, they can speed up melting of the surface ice by as much as 20 percent. 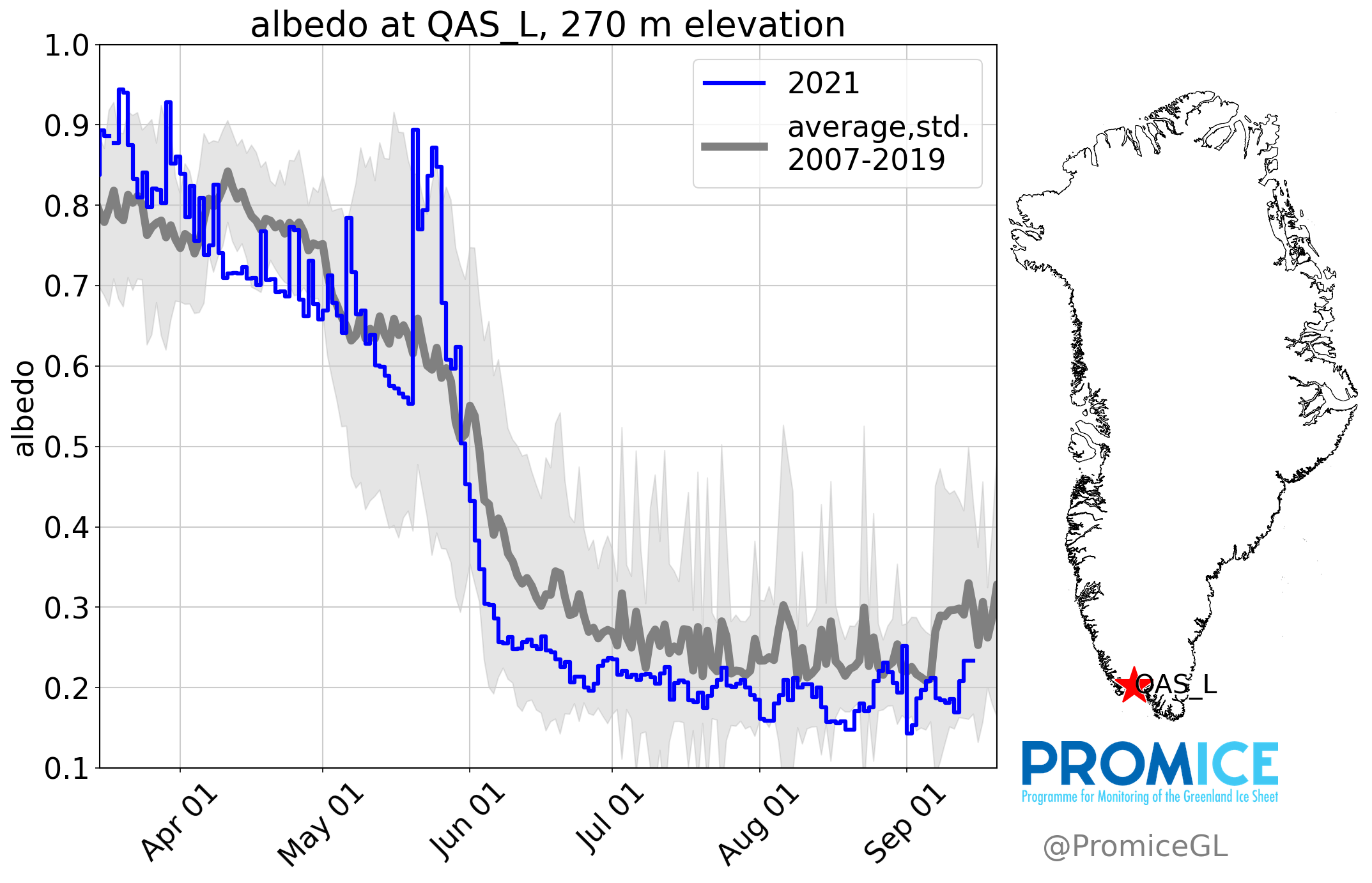 PROMICE climate station recordings of surface darkness (a.k.a. albedo) for 2021 compared to the average since 2008. Melt season 2021 albedo was at or near the lowest on record for more than three months (June through mid-September). The cause is thought to be from persistent cloudy and rainy conditions that promoted ice algae growth. In May however, snowfall caused the albedo to increase shortly before decreasing during the summer melt season. (Illustration: PROMICE)

These years the algal growth on the Greenland Ice Sheet is on the rise, which Professor Box and other PROMICE and GC-Net researchers have helped quantify. Since much of the research done by the team require travelling all over the ice sheet every year, they are starting a new PROMICE activity “PROM-BIO” in collaboration with Aarhus University Professor Alexander Anesio.

The work supports ice algae research by collecting biological samples from the ice from places that would otherwise be difficult to reach for other researchers. 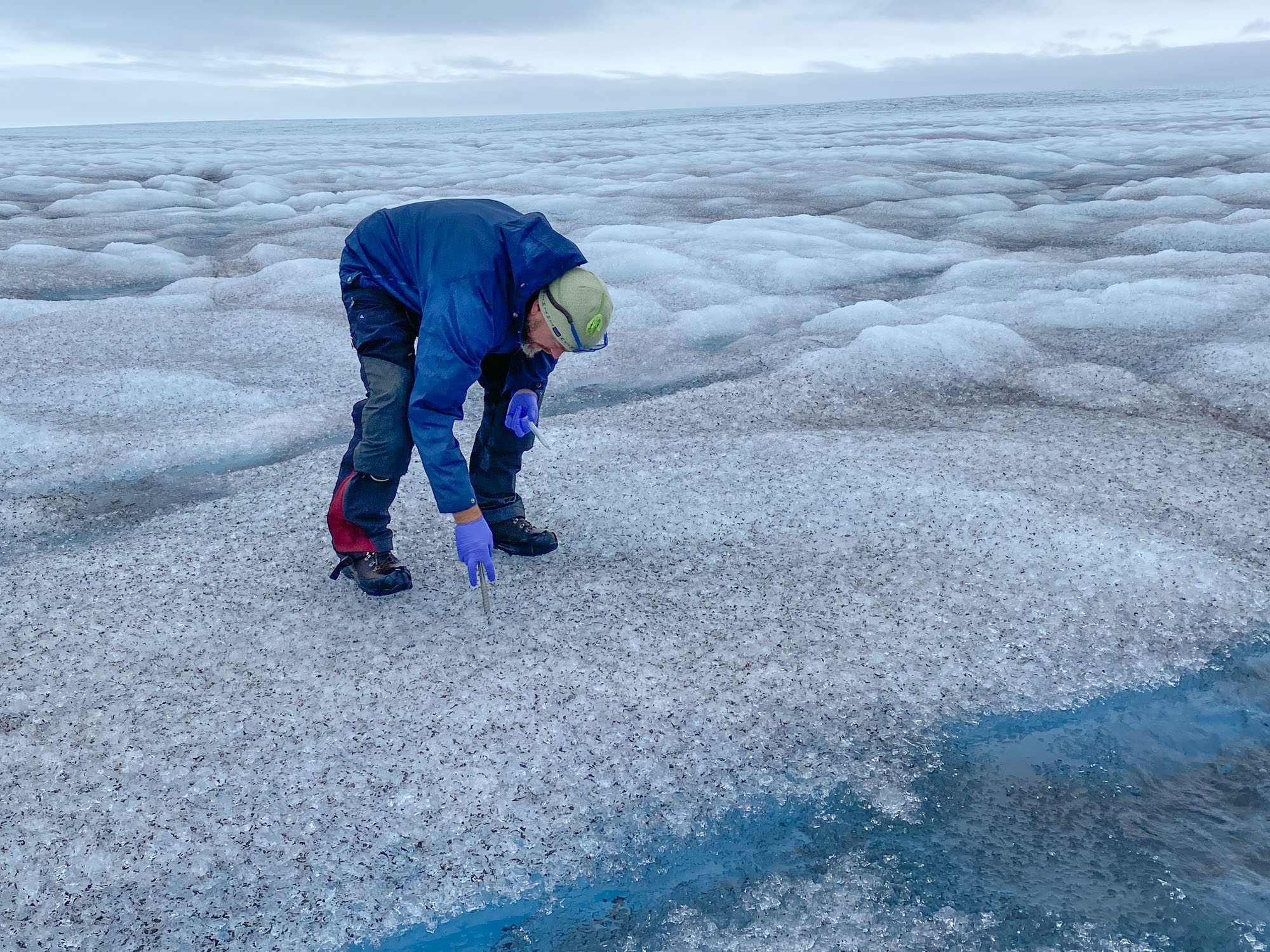 This helps other researchers understand the development and biology of ice algae with some emphasis on the dark ice relationship with melting which in turn helps PROMICE and GC-Net understand how the darkening ice surface effect the overall mass balance of the ice sheet.

“Ice algae have started to colonize larger parts of Greenland. They’ve become an x-factor in the melting process,” Box said in the Politiken article.

Along with the algae blooms, 2021 was also the year of the first ever witnessed rain falling on the highest and coldest areas of the ice sheet. An event also measured by PROMICE and GC-Net automated weather stations.

As Professor Box explains in Politiken, he and the rest of the researchers studying ice and climate dynamics in the Arctic constantly find new factors driving the melt of the ice sheet:

“Algae blooms existed before humanity. One could observe dark ice in Greenland 200 years ago as well, but what we see now is that the heating of the Earth allows for many different factors to enhance each other. We have several climate models predicting a warming, but reality surprises us over and over because the models haven’t taken all of the contributing factors into account.”

Therefore, the work done by PROMICE and GC-Net becomes all the more important, trying to understand all of these factors effecting each other and enhancing the melt.