A new study by researchers from Denmark and Canada, published inGeophysical Research Letters, has found that the climate models commonly used to simulate melting of the Greenland ice sheet tend to underestimate the impact of exceptionally warm weather episodes on the ice sheet.

The study investigated the causes of ice melt during two exceptional melt episodes in 2012, which occurred on 8-11 July and 27-28 July. During these exceptional melt episodes, which can be regarded as an analogue to future climate, unusually warm and moist air was transported onto the ice sheet. During one episode, the researchers measured the ice sheet melting at more than 28 cm per day, the largest daily melt rate ever documented on the ice sheet. While the two brief melt episodes only lasted six days combined, or 6 % of the melt season, they contributed to 14 % of the total melt.

Using the Programme for monitoring of the Greenland ice sheet (PROMICE) automatic weather station data, the researchers ranked the energy sources contributing to surface melt during 2012 at twelve PROMICE sites around the ice sheet periphery. While ice sheet melt is usually dominated by the radiant energy associated with sunlight, the researchers found that the energy associated with air temperature and moisture content, rather than radiant energy, was responsible for more melt during the 2012 exceptional melt episodes.

Robert Fausto of the Geological Survey of Denmark and Greenland, lead author of the study, explains: “When we were analysing our weather station data, we were quite surprised, that the exceptional melt rates we observed were primarily caused by warm and moist air, because ice sheet wide melt is usually dominated by radiant energy from sunlight. ”

This finding has implications for how the scientific community projects future ice sheet melt using climate models. In the study, the researchers also show that while the models presently used to project ice sheet melt can accurately simulate melt due to radiant energy, models tend to systematically underestimate melt due to the non-radiant energy processes they document.

“It is difficult for the models to fully capture the details of these episodic, but important, non-radiant energy melt events because of the turbulent nature of the atmosphere very near to the ground”, says Peter Langen of the Danish Meteorological Institute, a co-author of the study. “Exceptional melt episodes dominated by non-radiant energy are expected to occur more frequently in the future due to climate change. This makes it critical to better understand the influence of these episodes on ice sheet health,” concludes lead author Robert Fausto.

PROMICE is funded by the Danish Ministry of Energy, Utilities and Climate under Danish Cooperation for Environment in the Arctic (DANCEA) and is operated by the Geological Survey of Denmark and Greenland (GEUS). PROMICE data are freely accessible at http://promice.org. HIRHAM5 climate model simulations were carried out by the Danish Meteorological Institute (DMI) under the Nordforsk project SVALI and the Danish funded Greenland Climate Research Centre project. 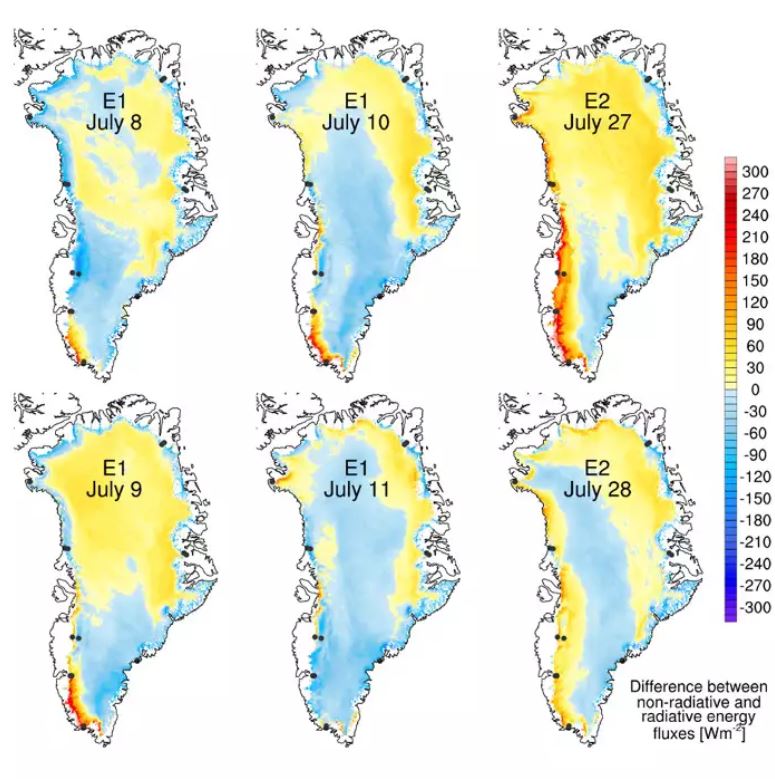