For the first time ever recorded, in the late summer of 2021, rain fell on the high central region of the Greenland ice sheet. This extraordinary event was followed by the surface snow and ice melting rapidly. Researchers now understand exactly what went on in those fateful summer days and what we can learn from it.

The never-before-seen rainfall, on 14 August 2021, made headlines around the world. The upper-most parts of Greenland’s enormous ice cap used to be too cold for anything other than snow to fall, but not anymore.

What caused this extreme event and how did it affect the ice? Researchers from the Department of Glaciology and Climate at the Geological Survey of Denmark and Greenland (GEUS) in collaboration with colleagues from France and Switzerland have since scrutinised these questions and come up with the answers.

Studying detailed data from these stations alongside measurements of surface reflectivity, or albedo, from the Copernicus Sentinel-3 satellite mission and information on atmospheric circulation patterns, the researchers discovered that the rain had been preceded by a heatwave at a time of year when seasonal melting is usually slowing down.

From the onset of the August heatwave in 2021, the surface of the ice sheet (here seen east of Kangerlussuaq) became notably darker due to melting snow, lowering the albedo and making it melt way more than expected for that time of year. (GIF: Edited by GEUS, images from Copernicus Sentinel-2, ESA)

It wasn’t the rain

“It turns out that the rain itself wasn’t the most important factor”, says Prof. Jason Box from GEUS and lead author of the paper reporting their results, which were just published in Geophysical Research Letters.

“There is an irony. It’s not really the rain that did the damage to the snow and ice, it’s the darkening effect of the meltwater and how the heat from the event erased snow that had overlaid darker ice across the lower third of the ice sheet.

“Unusually warm atmospheric rivers swept along Greenland in the late summer months, bringing potent melt conditions when the melt season was drawing to a close.”

In fact, this sudden increase of surface ice melt on Greenland could have happened without any rain ever touching the ground.

The main culprit was the heat itself, melting and completely removing the surface snow, thereby changing the surface albedo, Greek for ‘whiteness’, so that Greenland snow and ice absorbed more of the Sun’s rays.

The researchers found that, between 19 and 20 August 2021, this melt caused the altitude of the ice sheet’s snowline to retreat by a whopping 788 metres, exposing a wide area of dark bare ice (see below). 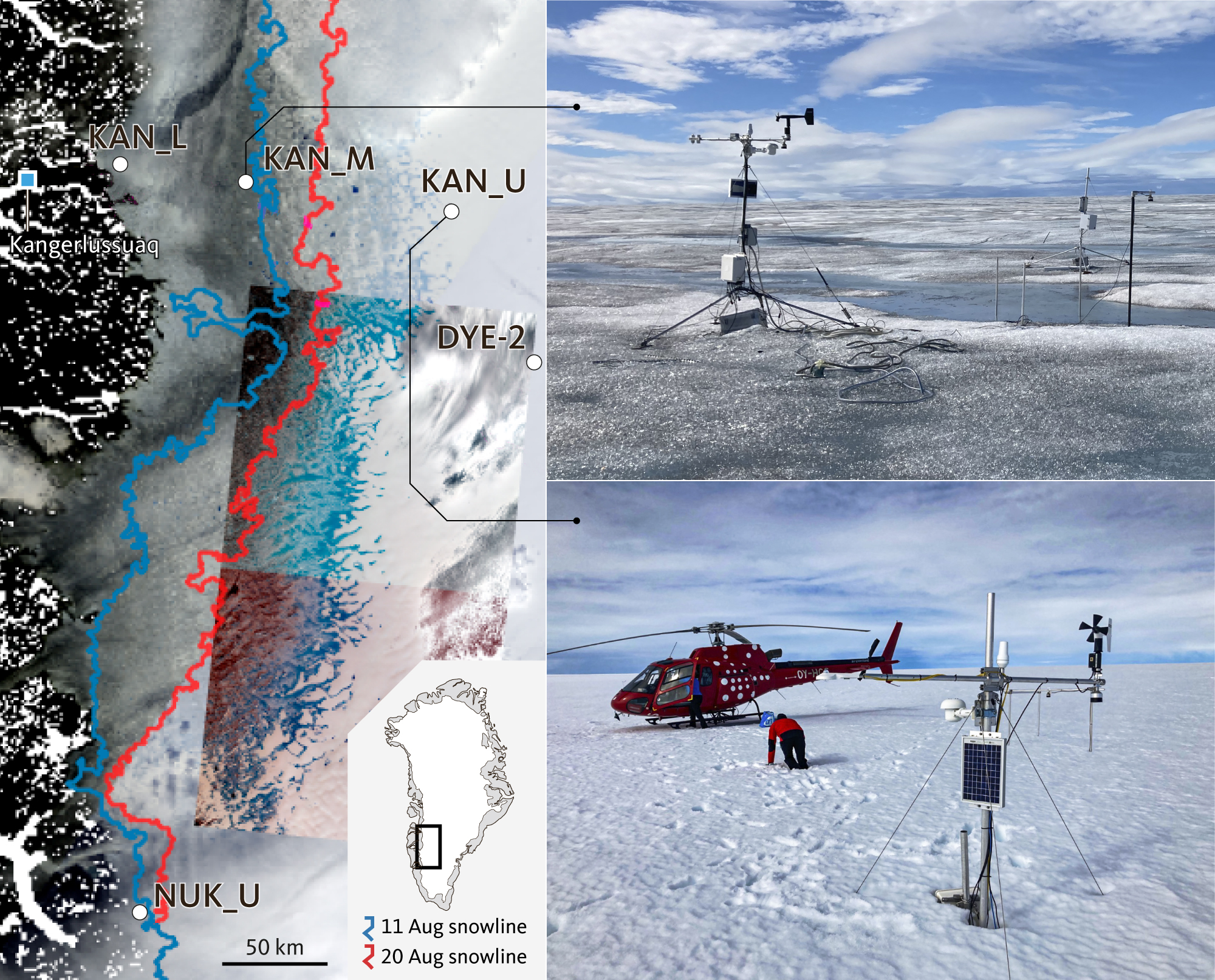 One of the areas of the ice sheet hit by the heat wave, causing the snowline to retreat immensely in a short period of time. This is along the PROMICE/GC-Net Kangerlussuaq transect of automatic weather stations (white dots) from where the researchers documented the very warm, wet ice and snow conditions during their field work. Usually the snow at KAN_U station is not this difficult to walk in during august. (Illustrations: GEUS, edited from Box et al. 2022 by C. Thuesen, photos Dirk van As).

Under normal circumstances, snow would cover and insulate this ice, but the snow melted suddenly and exposed the ice to heat, causing even more melting.

Since 2017, Prof. Box and colleagues have been consistently monitoring these melt dynamics with data from the Copernicus Sentinel-3 mission as part of their research supported by ESA’s Earth Observation Science for Society programme.

They found that more bare ice had been exposed on the one day of 19–20 August than any other day since their research began (see below). 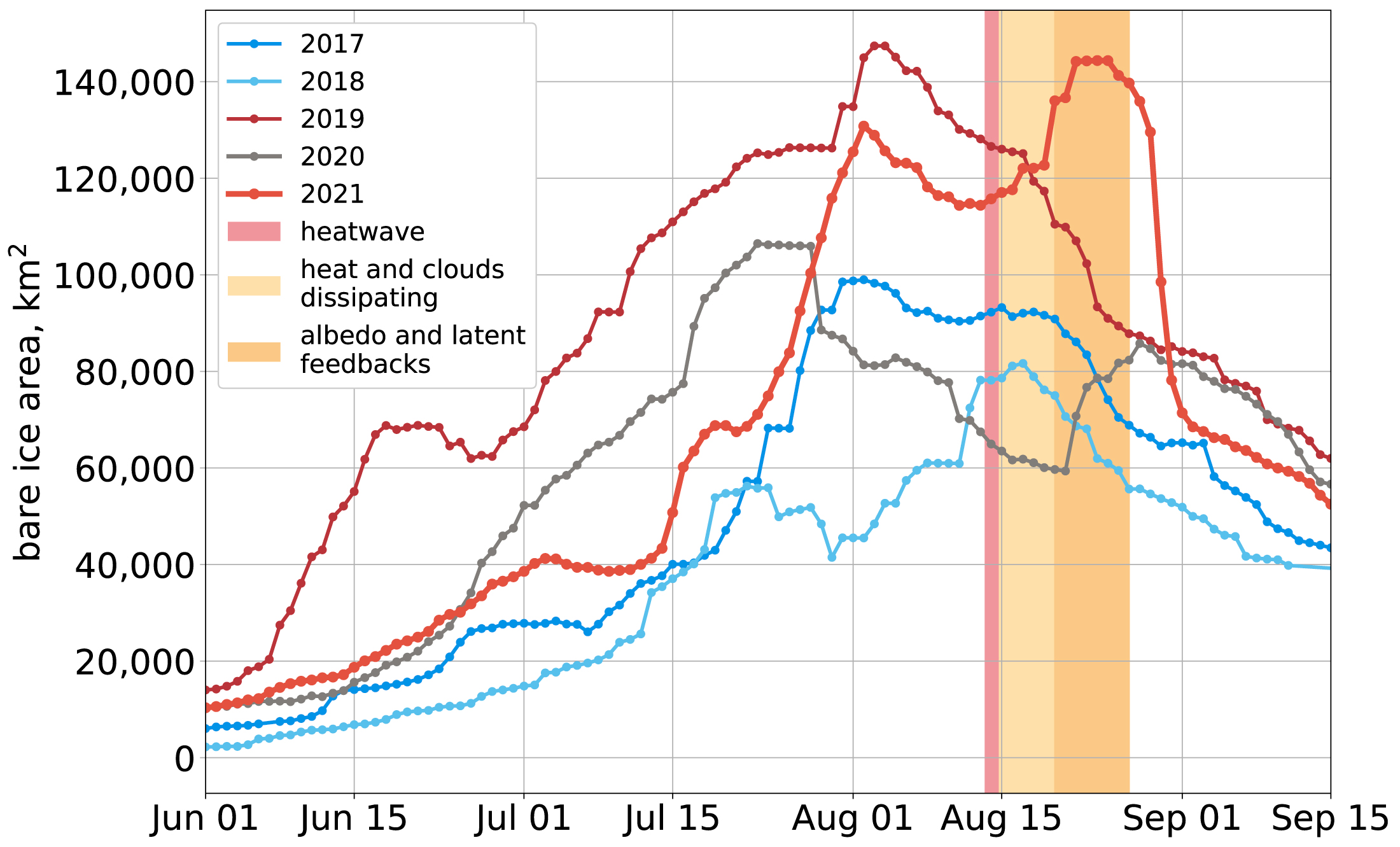 Area of bare ice measured from 2017 to 2021, where the heatwave in 2021 greatly increases bare ice extent very late in the melt season. (Illustration: Edited from Box et al. 2022 by C. Thuesen, GEUS)

So, what does this mean?

The authors conclude that the heatwave causing the rain event serves as an excellent example of ‘melt-albedo feedback that amplifies the melt impact of the initial melt perturbation’.

Besides the obvious concern of making the ice sheet melt faster while this was happening, studying the event using detailed measurements from the network of automatic weather stations on the ice set up by GEUS coupled with measurements from the Copernicus Sentinel-3 satellites helps understand the exact processes and dynamics of how ice melts.

Even though the rainfall was a shock and a milestone in climate history, researchers knew it was bound to happen sooner or later, given the rising temperatures of the Arctic.

Therefore, Prof. Box and the co-authors encourage research to look further into the workings behind atmospheric rivers and not just rainfall.

They conclude that understanding the frequency of heatwaves, appears to be a more significant research target than the liquid precipitation that heatwaves may or may not produce. 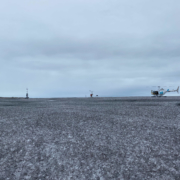 Algae blooms: “I never saw the ice as dark as this”
0 replies

After months of preparations and safety training: The Arctic field season 2022...